How did I "tangle" from San Diego with some 30 students in Denver today?
Thanks to virtual learning with ZOOM, I was able to share the Zentangle Method from a distance.

Natalie Kuypers, the senior/children events specialist, from the Arapahoe library in the Denver area contacted me and asked if I could teach a virtual class for the children (5-12 years) Grab and Go: art day class they have each month at their library. Having taught many children Zentangle classes in San Diego - I know kids LOVE Zentangle. So many folks/kids have not heard of this secret gem art method. YES, YES, YES.  How could I say no.

February 7th, 4:00/5:00, Pacific/Mountain time, Ashley and Emily's hosted the class from library.  Together the kids and I created a fun ZIA (Zentangle Inspired Art) robot bookmark using the Zentangle Method.  Our "string" took on the shape of a robot. 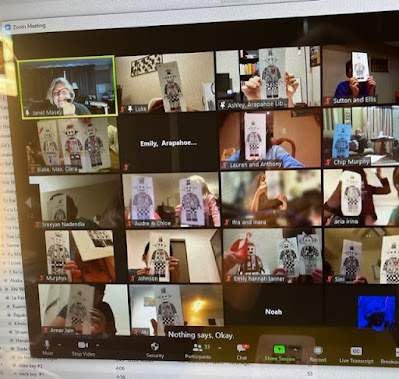 I supplied the library with template for project/list of materials to add to package for kids to pick up before class. The library included tassle for bookmark, hole punch, and laminate to cover bookmark.
The kids were taught seven patterns "tangles" - Printemps, Knightsbridge, Ambler, Knase, Fescue, Meer, Tipple.
Thank you to the Arapahoe Library for seeking a new fun art method for your Grab and Go:  art day.
If you are interested in a remote class to share the Zentangle magic -
email me for how:  maseyjanet@gmail.com
Janet Masey, Certified Zentangle Teacher
858-505-9611
Posted by Janet Masey at 6:22 AM No comments:

The Holidays are upon us.  Just a couple weeks left to get your gifts/wrapped, cookies, pies, invitations, and caroling done.

Today was my second Zoom class for the San Diego City libraries since March 2020, after the pandemic hit. Class was at University Community Library in UTC, San Diego, CA.  Thank you to Library Manager, Melissa, for asking me back.

I thought a Zentangle Nutcracker was appropriate for the season.  About twenty students joined me with instrumental holiday background music to top off this stressful time of year with calm, relaxing, two hours together creating and ZIA (Zentangle Inspired Art).

Zentangle is a meditative art method that takes the stress out of life while you are drawing. No mistakes, no erasers, no rulers.  I will be back at the library in the near future.

A couple pic from class. 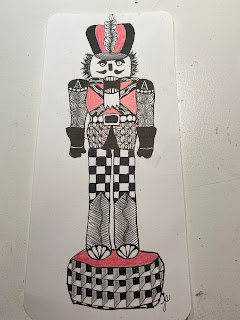 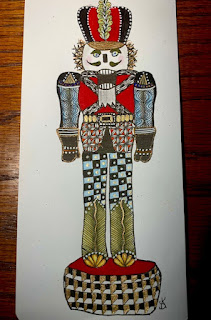 Judy - love all the bling bling you added.

Visit your library to see if they have Zentangle classes coming your way for 2022.
FYI -I'm teaching a Zoom class at a Denver Colorado Library in February.
Where there's a will, there's a way to share Zentangle.
Have your library contact me -maseyjanet@gmail.com
Posted by Janet Masey at 5:53 PM No comments:

After almost two years shut down from teaching at San Diego Library during this crazy pandemic, finally, I am back at the library to teach Zentangle classes. Thank you to the Melissa, University Community library Manager, for asking me back.

November 16th, I created a fun tile for my first class back called "stacked books".  Here are a couple of the art pieces from class.

Twenty tanglers joined me for class today.  I am happy to announce one of my students (who joined class), recently completed the four day seminar and is now an officially Certified Zentangle Teacher.  Welcome to a wonderful group of women and men Cailin. 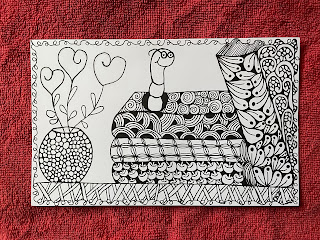 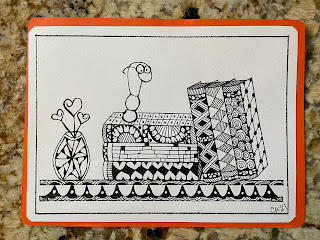 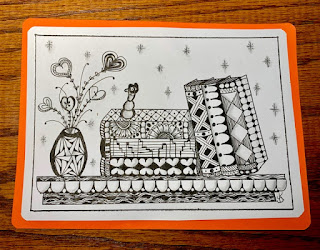 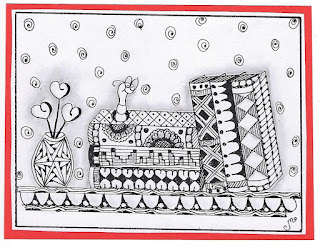 Next Zoom class at University Community Library December 14th, 2021.
We will be working on a Zentangle (ZIA) Zentangle Inspired Art - Nutcracker.
Register @ https://sandiego.librarymarket.com/events/virtual-zentangle-home-0
Posted by Janet Masey at 3:39 PM No comments:

While watching the 2020(21) Olympics this summer, I was inspired to tangle a tile. 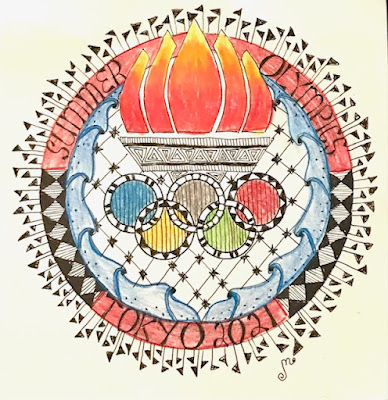 Which country has hosted the most Olympics?
The United States has hosted or been awarded a total of eight Olympic Games, more than any other country, followed by France with five and Japan with four editions.

Who is the youngest person to go to the Olympics?
Dimitrios Loundras was one of the first athletes to compete in the Olympic Games when they made their modern debut in 1896. He was 10 years old when he competed in the Summer Olympics in Athens and won a bronze medal with his gymnastics team. He has held the title of youngest Olympic athlete since that time.

During the period 1912-1948, artists of diverse categories, such as musicians, painters, writers, sculptors, and architects competed for medals.

Against popular belief, the gold medal is not made out of pure gold, instead mostly silver since the 1912 Olympics. Today’s gold medal is made from 6 grams of gold, the rest is silver.

You probably have seen athletes biting their Olympics medals. Want to know how this tradition started? It takes us ages back to when merchants used to check the purity of gold by biting it. If there are teeth marks left on the gold coin, then it is not actual gold. As mentioned earlier, gold medals in the Olympics nowadays are merely finished with gold. In the 1904 Olympics, the gold medals were entirely gold.

Antarctica & Africa are the continents where the Olympics have not been held yet.
Pushing boundaries. The youngest known Olympian to take home a medal was 10-year-old Dimitrios Loundras, who finished third in the team parallel bars at the 1896 Olympic Games.
The running race known as stadion or stade is the oldest Olympic Sport in the worl the only event at the very first Olympics in 776 BCE and remained the  until 724 BCE.

Not to get into politics - but RBG has some amazing accomplishments during her life.

Ruth Bader Ginsburg one of only four females Supreme Court Justices in history.
A couple of her many accomplishments while in office.

-Women have the right to financial independence and equal benefits.

Ginsburg’s work paved the way for the Equal Credit Opportunity Act, which passed
in 1974 and allowed women to apply for bank accounts, credit cards, and mortgages
without a male co-signer. She also helped ensure that women could receive the same
military housing allowances as men, and women are no longer required to pay more
for pension plans than men to receive the same benefits, according to the ACLU.

-Men are entitled to the same caregiving and Social Security rights as women.
Throughout her career, Ginsburg stressed how gender equality benefits both men and women.

In 1968, Ginsburg represented Charles Moritz, a man who had never been married and claimed a tax deduction for caring for his mother, according to Smithsonian Magazine. The Internal Revenue Service (IRS) denied his deduction because he was a man and unmarried. The US Court of Appeals for the Tenth Circuit ruled that the IRS had violated the Equal Protection Clause of the US Constitution and in 1971 Section 214 of the IRS Code was amended to allow individuals to claim caregiving deductions, regardless of sex.

-Juries must include women. 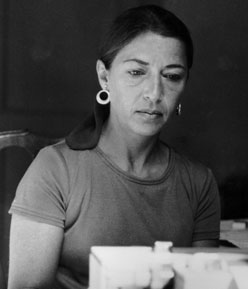 Today Zoom class, 7/24/21, we thank her for all her efforts for the people. I was suggested to design a class of a famous person.  Jeanette, a student, suggested Ruth Bader Ginsburg.  This class is the design I came up with.
Tangles:  Ambler, Knightsbridge, Fassett, Inapod, Floatfest, Shattuck, Panthe, C02 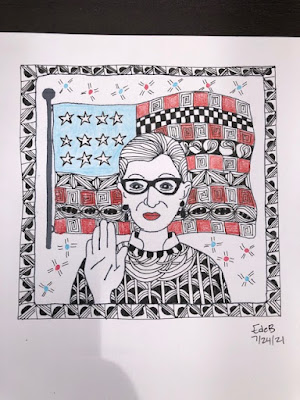 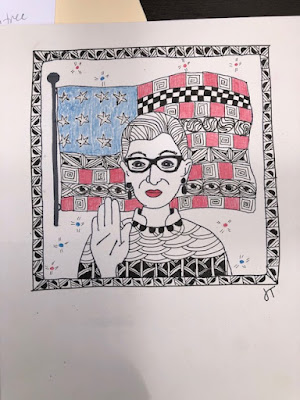 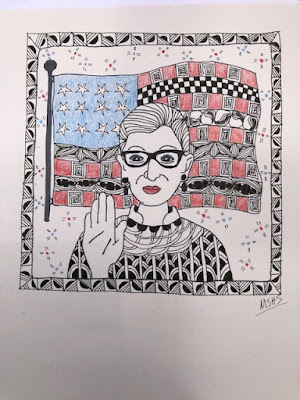 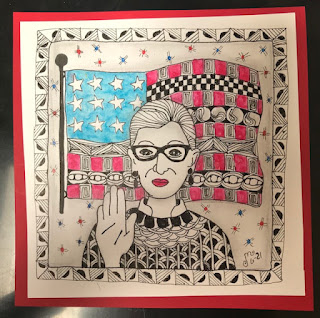 Posted by Janet Masey at 5:54 AM No comments:

Zoom Zentangle Class Zendala (In the round) Swim

7/10/21, I couldn't resist to share a fun class I designed after San Dieguito Synchronized Swim Team Coach asked me to teach a Zentangle class.  She said the kids had been so stressed out that sitting in on a Zentangle class might relax them from the COVID stress.

This class was created in a Zendala style - which is Zentangle Mendala idea - in the round. I added some swimmers to bring the kids theme in to create interest.

Today's class, Sharon, said she wanted to take this class because it reminded of her swim class that they called each other the "mermaids".  Summer is amongst us and who doesn't love the ocean or pool in San Diego during the summer. 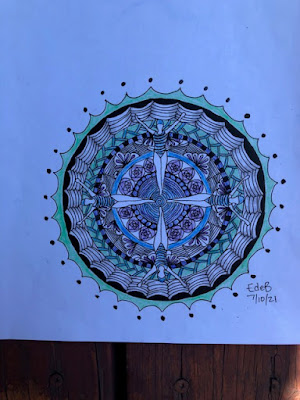 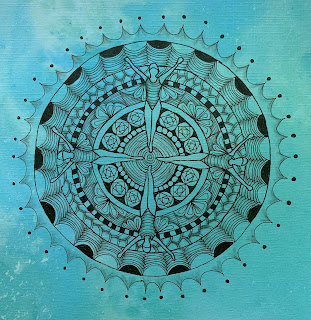 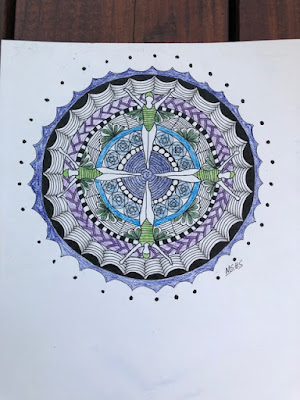 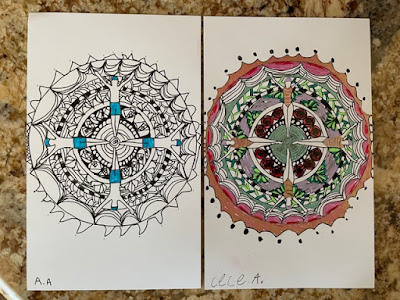 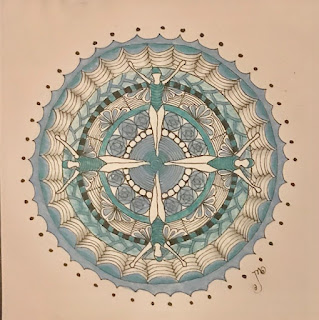 Posted by Janet Masey at 5:17 AM No comments:

6/26/21 - Today's class was all about floral tangles.  Using a collage of boxes we applied floral tangles to give a cool flower collage look. 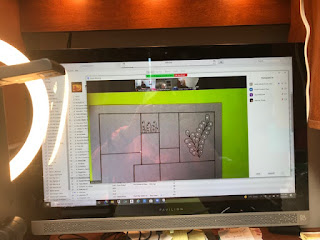 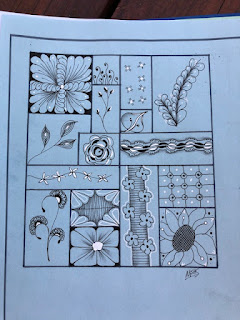 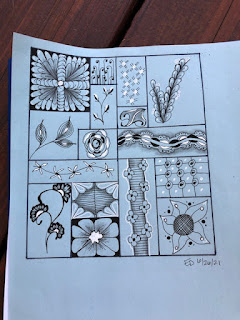 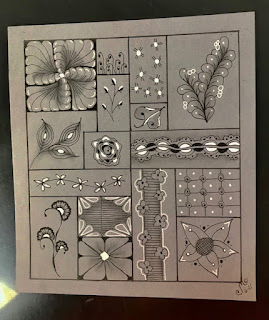 Posted by Janet Masey at 2:24 PM No comments: